Discuss equipment which does not fit in in the other forums here, like cable cranes, material handlers, drilling, piling and screen equipment
Post Reply
11 posts

I spotted this machine on the dobwalls bypass and it looked like abit of a beast!
I know nothing about this machine so if anyone wants to fill us in feel free!

You do not have the required permissions to view the files attached to this post.
Top

Looks like a Tesmec-built rig. This company specialises in building large crawler trenchers and another similar machine called a "rock saw", although to be honest, I'm not all too sure what the difference is?

I've never seen any in person, but even in pictures they are behemoths, it'd be nice to see them at work for sure! I know a woman who lives in Odessa (Texas), had two of these Tesmec rigs working some distance behind her house. They have thick rock beds there and the machines were being used to cut trenches into it, apparently the dust cloud could be seen for miles!!

Well for some reason I couldn't post another topic covering trenchers, so here's one from today's wanderings just after purchasing a new lens for my camera.

Its certainly not in the same league as the above (possible Tesmec) trencher but since I've never managed to get pictures of one of these before, its something different for me to wander about and annoy people with.

If anyone's wondering, the black stick to the left on the first picture is my monopod which I use with the heavier lens. The last picture contains the only number of any sort which I could see on the machine, apart from an engine part being labelled Ford. The number on the plate is CKA 6958. A parts number perhaps? Ok so the engine is Ford, but what about the machine on which the trencher is mounted, a Ford conversion perhaps, or just Ford powered?
You do not have the required permissions to view the files attached to this post.
Look out that window, Eden isn't burning. Its burnt.
Top

Gavin,
Looks to me similar to the Barth & Holland machines which were sold here in the Uk. Many of them were based on County/Ford skid units. We used to have one work on the farm doing land drainage during the 80's (when there was still grants available

). Was a pretty good machine, it was a tracked version. I don't know if I have any photos of it.
http://www.flickr.com/photos/tracshovel/
Top

Nice to see you on here as well as on FlickR (I'm listed as balacau)!

Thanks for the information.

I'll be keeping an eye out for any sales brochures and leaflets on Barth & Holland from now on as I'd love to know more about this contraption. Its quite possible I saw another one of these machines (if not the same one) on a farm about 2 years back, but I never got a chance to get a picture.

I wonder if its possible to identify the machine using the CKW number...?

Look out that window, Eden isn't burning. Its burnt.
Top

Used to use rock saws a lot on concrete runways ,for putting in new runway lighting cable trenches. Ideal for cutting through 600mm of unreinforced PQ concrete. They had a large diameter narrow width wheel with lots of acorn size teeth on like a road planers.
Not all those who wander are lost.
Top

Looks sort of similar to machine used by Ag Contrators Moores on the devon/cornwall border for doing field drainage, theirs is mounted on tracks with pipe laying kits, stone hoppers/conveyors and backfilling blades for a 1 pass operation. dread to think how much it wighs all in, certainly looks the part strapped down on the back of an artic. Doesn't like wet ground though, not unusual to see it being pulled by a Swinger/dozer (has been known to had to be towed by a pair of 14T machines side by side), suppose tracks reduce ground pressure to that little that it stuggles to bite down to the dry stuff and grip.
Top 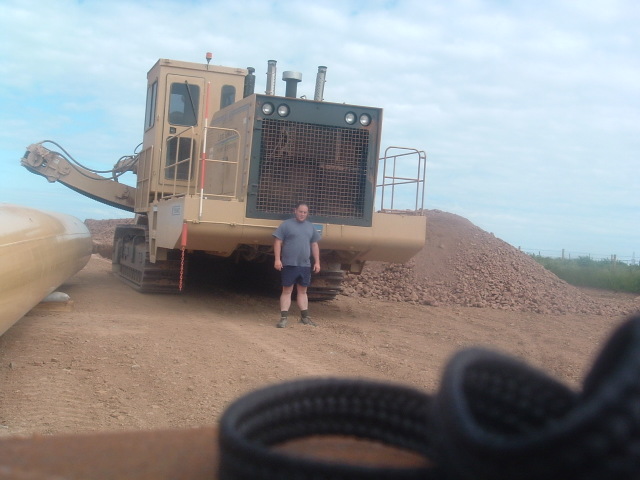 I know a family business who used to operated Tesmec rock trenchers & saws, we were in their yard one day talking to the gentleman who owned the show & he got a bucket containing teeth for the trencher to show us, in it was a lump hammer used to knock the teeth into the holes in the chain. I forget what metal he said the teeth were made of but the lump hammer had been all but destroyed.

They used to use the machines all over the UK & as far as I know they also did some continental jobs with them. Typical jobs for the saws would be dropping a bridge, they'd be lowloadered in, cut across a bridge deck & back on the lowloader again. He's a very knowledgable man ref the groundwork/plant game & it was very interesting man to talk to him about these trenching/cutting machines.

I watched this beast in action on a pipeline job in QLD.
She is made by Trencor & runs D11 track chains on the cutting gear so she needs plenty of horsepower!!
The finished trench is top quality; leaves the big excavators for dead.
You do not have the required permissions to view the files attached to this post.
Top

What a beast of a machine

And as you say what a finish to the trench ...Amazing

Why not visit my Digger Man Blog at Earthmovers http://www.earthmoversmagazine.co.uk/?page_id=3092

Users browsing this forum: No registered users and 4 guests