Are you searching for equipment?
Forum rules
Please use so called TAGS in the subject of the post when posting in here.
[For sale]
[Wanted]
[Exchange]
[Swap]
Post Reply
33 posts

I've got a Bradbury Liftmaster Mk3, 3 ton 4 poster with the wheel free beams. I picked it up for 75 quid from ebay

I was just getting it all set up during Lockdown 1 at my old house when my life fell apart due to my wife's wierd behaviour and indiscretion. Now need to relocate it down here to Kent. So probably too small for your needs, but ideal for the things I like to play with.

As for the land there in lies a tale; when my folks moved here in 1972 it was an apple orchard full of huge standard bramley's, not long after the field was sold the trees were grabbed up by the farmer who bought it and given over to arable. My dad very wisely made sure that the access rights, which were in their entirety up our drive, through our farm yard and accross a patch of paddock, that were renegotiated during the sale were put in the deeds as 'agricultural use only (arable)'. Roll on to 1987 and the farmer gave up farming and sold up at auction. A local developer (with an appalling reputation) bought it, and a few days after the sale marched up to discuss his access rights. He was quite dogmatic about how he could ride roughshod in court over access until it was politely explained that access went over 7 separate parcels of land and it would need to be negotiated over each. We owned all of them. He was not best pleased! They tried to get outline planning and failed on numerous attempts under the Kent Stucture Plan, so it was kept in land bank and they did noting with the filed bar plNt some bloody Laylandiai along the foot path. Roll on to 1999, and failing once again to get 'our' field and others included in the latest structure plan (due to access!) the developer decided to retire put his business up for sale and started to divest himself of various plots that weren't really going to be viable. The land was again going to go to auction and was being marketed with road frontage! Various potential buyers started pitching up to have a look and each time they appeared in our yard we politely enquired whether they were lost, and when they explained why they were there we asked them to park out on the road and walk up as they were on private property...unsurprisingly it wasn't long before the land agent rocked up to find out what was going on, and the same discussion about access rights (agricultural use only (arable)) took place, except this time we expressed an interest and eventually agreed to buy the land out of auction for the same price as it had sold for in 1987...£32,000). This time round though the land had gone from really great condition arable to overgrown mess full of brambles, self sown trees etc. We cleared it all over time, bar the 'far, far field' bit, grubbed up most of the leylandiai, laid some proper hedge rows, and laid it to pasture. We did the work mostly ourselves having lots of fun learning how to lay a hedge properly for example.
CN Stuff: MF65, Thwaites Nimline, JCB 3CX
Daily: M140i
Projects: S11a 88" V8 Hybrid, 2 x S111 109"s, Mk11 Mini, Harrison L5A

Your dad was a wise man, and I'm sure it has passed on to his offspring. access can be a killer to potential developers. My house before last in Kent (Strood) backed onto a series of allotment/smallholdings. It had about 1/2 acre plot and double gates at the back onto a 12ft. Wards bought quite a few of the (very) small holdings but ownership of the 12fts was in the association name which automatically had all the adjacent owners as its constituents. My plot extended behind and went across the back of my neighbours. Wards got planning permission to build on the back of my garden (the tried to show it finished in line with the houses on both sides). After a long battle in which my deeds fortunately proved where my boundaries were I then had a second battle to stop them removing my rear access (sounds painful) as they had 'bought' the association. Fortunately however its constitution originally enshrined access from the 12fts and after a over a year's fight they had to remove the houses which would have been across the rear of my property and in their place they extended the roadway across my rear and made a turn to my gates. They tried to buy the rear of my garden but I wasn't interested, the way they did they road would however allow them to put back the houses they lost if they could ever get the land.
Well done to your dad for getting the your land, that's how it should be and I hope you'll keep the ransom strips in place and preserve the pasture from development.
The chap who bought the woods across from me has been doing some proper hedge laying - he went to classes to learn - and I must say it looks good now it's getting established.
Wheel frees, my dream. Those jacking beams are worth their weight in gold, now all you need is the ATL stuff! I have long had the ambition to have a full MOT test facility in my garage, it'll never happen but I'd love the rolling road and ATL on a four poster. I actually bought a bosch MOT emissions tester a few years back but found I hardly ever used it and it was a great big thing on wheels (hence it only cost me £12 from a local auction) so I sold it and have never missed it.
One nice thing with four posters is you don't need the 200mm of c30 concrete to install them and they make tracking so much easier but I have to confess I'd go for a 2 poster if I just had to have one lift, but for the price you paid that was a serious result! Don't try to use it as a press though, a friend tried it with his and pushed the bearings out and had a car stuck about 2ft in the air. He was using the lift force plus car weight to try to drive out a seized linkage but obviously (in retrospect) lifts are designed to lift weights not push them down. We tried all sorts including jacks from the top of the towers on to the ramp to try and push it back down but in the end it all had to come apart after getting the car off using the ramps from a trailer. This took over two days before we got it back up and running. This was all to save bringing the linkage back to mine and using my press with a bit of heat. ( it took about half hour of progressively heating with oxy and pressing until eventually with 20 tonnes of hydraulic pressure and some hairy hammering whilst it was in the press it finally came apart with a bang that had us all fearing for our lives.)
Top

It was old man Ward who owned our field, and it was immensely satisfying to have one over on him

We're down in the flood plain out towards Tonbridge.

My dad, Ted* and another guy from the local allotments that run alongside our field, taught themselves to lay the hedges and had so much fun doing it. It really looked like an episode of Last of the Summer Wine when you looked out across the field seeing one of them jumping up and down on a half chopped bow trying to weave it between the other trunks.

It's bizarre how divisive clearing a field, getting rid of weeds like Leylandii, restoring paths to their proper state and laying real hedges can be. You get townies who move into the sticks complaining about mature trees being removed (Leylandii are weeds and have no place in a field) and being replaced with proper hedgerows which are far better for the ecology of the area.

*an old chap from the village who used to come help my dad out on Monday's with looking after the land, cue lots of jokes about drainage problems in the lower field, when he was actually a bit more like Jim from the Vicar of Dibly. Sadly he passed last week after a stroke, and will be missed.

As for the ramp, well it's a similar model to the one I used to have access to at a motor club, now sadly defunct, with the wheel free units I get nearly the best of both worlds, I might see if I can get a jacking beam too. I've used two poster's as well, but they always make me twitch whenever I have had to really swing on something and the vehicle really starts rocking! Plus when you're working on rusty old machines finding something to put the pads on that won't collapse on you isn't always easy...

This was it set up in my back garden just before everything went wrong with my life, I was about to construct a workshop around it with a free-standing elevating roof(!) that would have been lifted with the wheel free end beams into position... 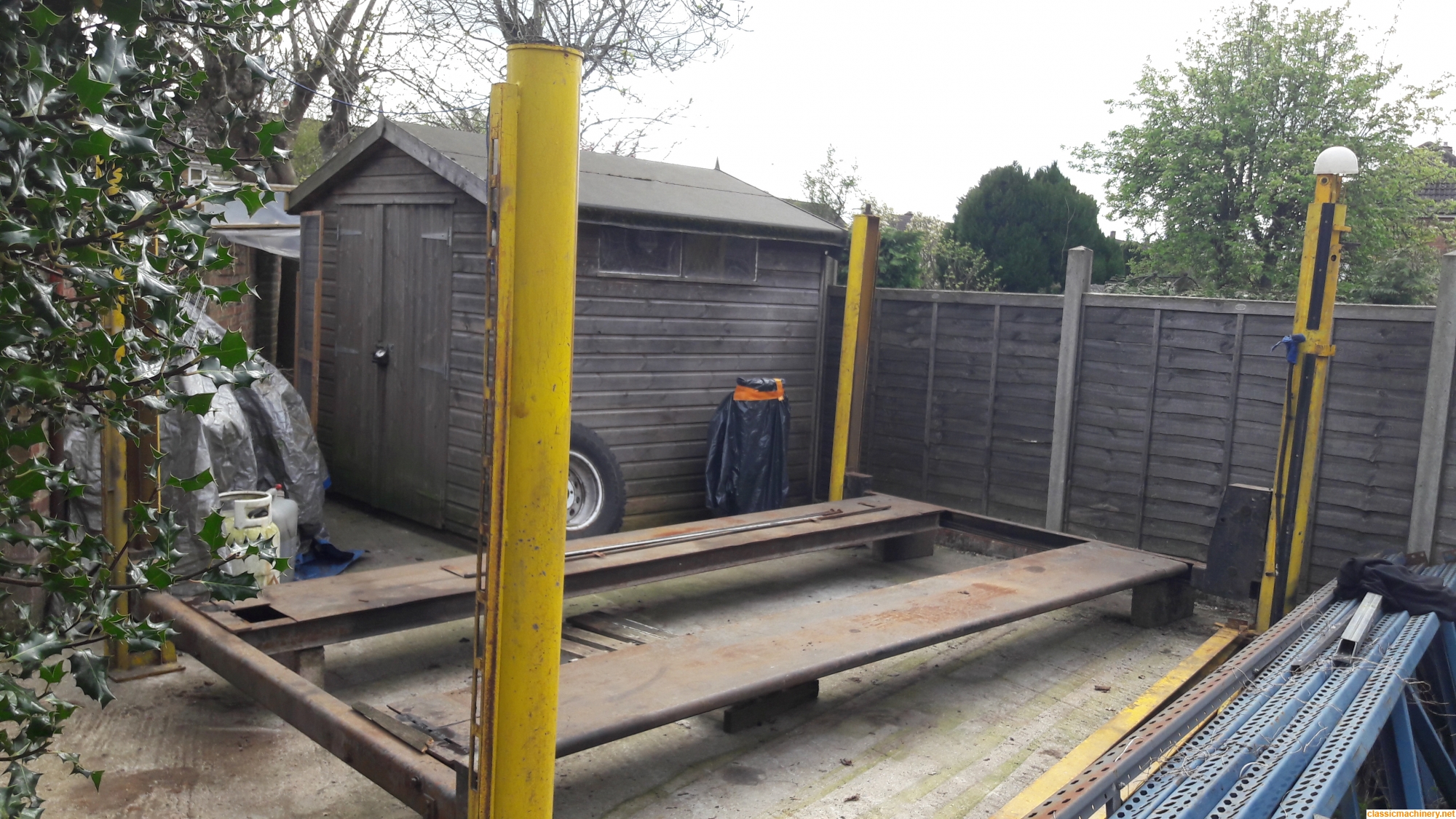 I've got a weird 30 Ton destructive testing rig press that I need to refurbish, that and my bigish Lathe should give me a useful workshop alongside the portable stuff. Now that you can 'buy' Acetylene bottles and gas from Hobby Weld along with Oxygen and Argon mixes I'm going to ditch BOC and go that way, I simple do not use the stuff often enough to justify the expensive rental over cheap refills. A Plasma Cutter is on the shopping list next. Oh and a used dishwasher converted into a parts washer will be coming in handy

On Monday I managed to borrow my sister and brother-in-law's crew cab van to drop my son back to my ex (something I could legally travel from a Tier 4 to do) and finally managed to collect some of my tools at long long last!

Users browsing this forum: No registered users and 3 guests