Are you working on a certain project? Renovating an old machine?
Tell us about it here and show us the progress.
Post Reply
121 posts

Anything's possible. But further investigation hopefully wont be happening until that floor is laid and I can roll the engine stand about with it on. Maybe I'll find someone local who can pressure test them both.

As of now the complete engine is out the machine and sat in the corner of the barn and I can put the other one in next weekend.
I took the bonnet off & used my small engine crane lifted up onto the machine & ratchet strapped to the loader arms across the machine to lift it out to just above loader arm level, and pushed two wooden beams under the crane and strapped them the arms also, then walked the engine out on them along with the crane moving each securing strap in sequence so it could walk, & lowered engine to ground the other side. Sketchy and H&S would shut down a site for it but it worked.
Getting the next one in next weekend might be even more fun but needs must, I wont be putting anything underneath it I want to keep attached for sure.
Top

Not got any scaffold poles or Dexion pallet racking you can use to make an A frame from?

During lockdown this time last year I needed to move one of my 109" chassis from the garden to the hardstanding where my ramp lives, and using some Dexion pallet racking, plus one of the wheel free units from the Bradbury 4 poster, along with a chain hoist and 25 quid beam roller I built this: 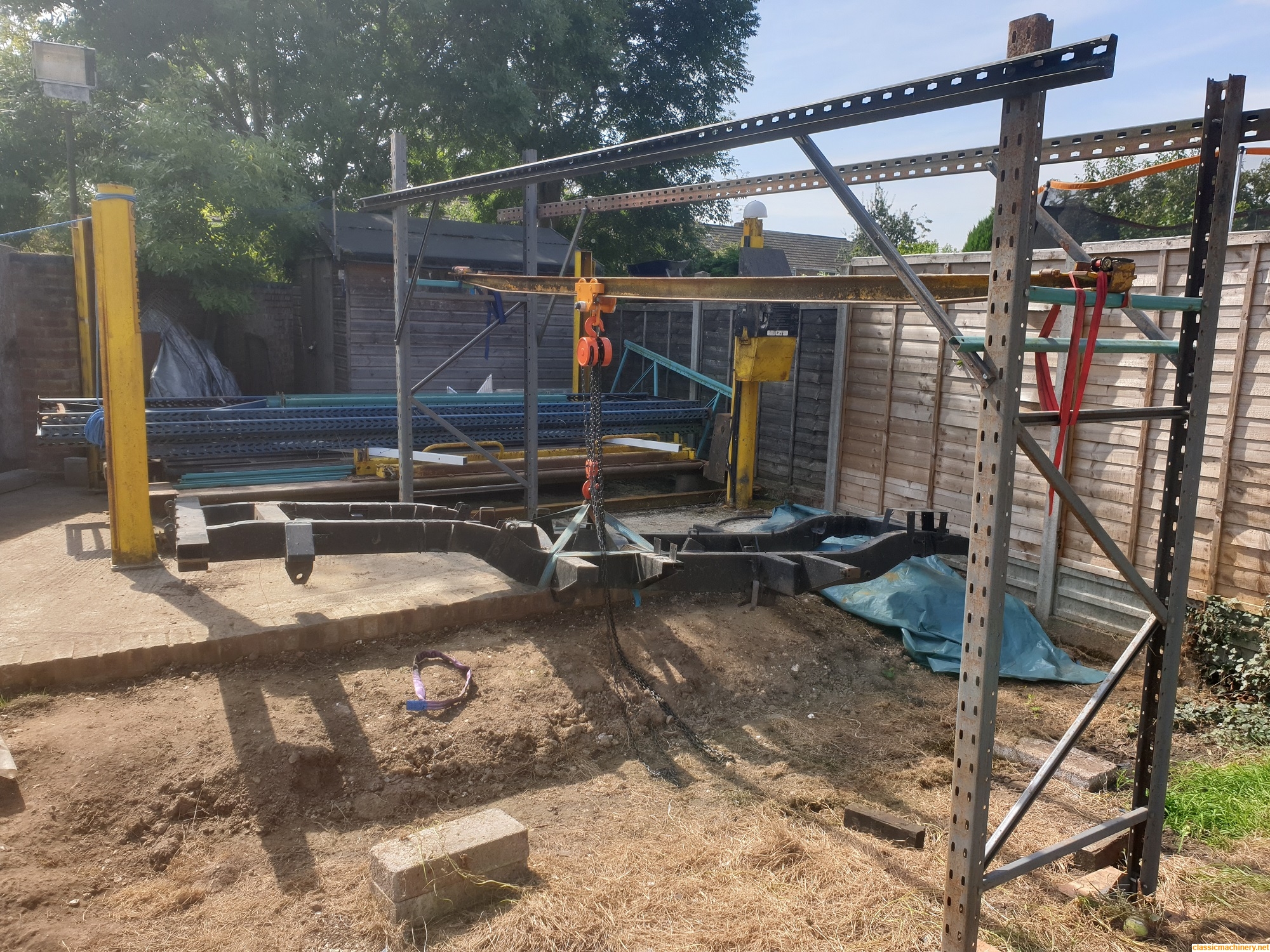 Not really, though I have a light aluminium scaffold & a hydraulic motorcycle bench but the engine is a heavy old thing and possibly beyond the capacity of both. I have a IPN (I beam) trolley and a hoist but only short lengths of IPN and nothing robust enough to form the supports for it.
Usually I use this big heavy thing with jcb wrote on it I keep in the yard as a structure for general lifting. Ive stood on the roof of the machine a few times but you wouldn't want to hang 380kgs of engine off it currently.

I'll come up with something, if not I will ask neighbor with telehandler to drop it on the beams in situ under the hoist and lower it in at my leisure using the engine crane. At the weight of it, its not going to take any prisoners if it falls on someone.
I missed a bl**dy forklift the other day in my region, wife said buy it but lets source transport, so I ring the guy and tell him I can come after work and will he hold it for me, then ring round trying to find transport and decide to go pay for it after work as promised then find a way to move it after, then we ring to say we're leaving the house and the seller tells me he's sold it for less than asking price to a machinery dealer who arrived with cash and a big trailer who buys all the handling equipment in the region. Grrrr but he who snoozes looses

That's a shame, as you can see in the background I do have a fair bit of random Dexion type pallet racking ends to turn into big Mecano. It was going to be cut, shut and welded into roof trusses for my ramp shed, but that's all coming out and down here to the farm once we are free to move about again so I can then get on with prepping my old house for sale and finalising the divorce settlement.

Fingers crossed, this is due to be collected by transport on tuesday and delivered as a birthday present from the wife.
The seller says its a manitou (but I notice that a lot of french people call forklifts manitou or fenwick's, its like calling a vacuum cleaner a hoover in the uk almost), and after about 15 minutes work when things warm up it looses drive but until then its ok. We can work with that. I'm not paying till its delivered and demonstrated though I'll be out the transport costs if I turn it away. Its a odd way to buy but we're locked down unless its for professional reasons and this is well outside my permitted zone.
So anyone recognize the model? Looking at pictures I think its a older Hyster XM40S/C177 with a two stage mast and the diesel isuzu motor, I will need to find manuals etc, it seems it has a shuttle transmission similar to the brockhouse torque converter on my 3c3. 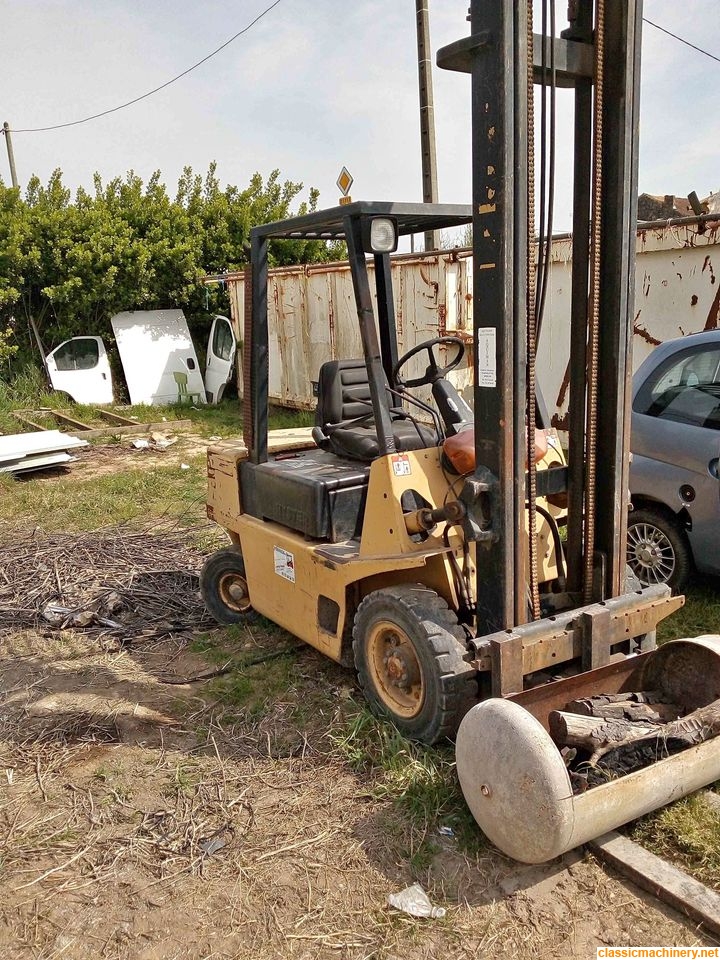 I hope the forklift goes ok, because mr sketchy the crane is now even scarier after todays get motors into place to lift session and a dressed leyland engine has been too much for him and he may have to finally retire after being pulled out of a scrap bin 22+ years ago...

mrsketchy.jpg
You do not have the required permissions to view the files attached to this post.
Top

Great bit of kit to have around the yard and I would be very interested to follow the progress as you find and repair the problem with the short operating window . Should be enough time to lift your new (old) engine in place ? Good luck with it . Cheers Chris
Top

I was going to make a hook carriage but they are 90e on ebay rated at 3t, so should be capable of a 500kg lift safely with proper D shackle instead of the supplied hook so it hardly seems to be worth investing time making one. Perhaps a long boom style later from some of the steel from the cut about stabilizer leg housing I have.

If the forklift is ok (well... transport actually turns up/can load/arrives, nothing is certain till the machine is parked in the yard in today's day and age), I'll pull the trigger on one of the cheapy hook carriages on ebay, for now i have chains/strops and clamps to stop them being able to slip off the ends of the forks.
Top

Sounds like an excellent plan. I bought the Chain hoist and beam roller for cheap as I realised I could use it on the ramp with the wheel free units to perform engine and gearbox swaps on the ramp rather than just on the ground at a later date having used it to lift the chassis, or even to lift a chassis on the ramp of an axle etc.