Are you working on a certain project? Renovating an old machine?
Tell us about it here and show us the progress.
Post Reply
91 posts

Well a little bit of progress, I took all the rams off and pulled the boom/dipper/etc out of the workspace so I could pull the tractor skid from the middle of the yard before the neighbours lynch me. The whole front nosecone of the tractor had been welded directly to the sides of the hydrachassis, and had broke off completely on one side and it was a bit of a pidgeon weld. So I free'd the other by slicing down the sheet metal alongside the weld without grinding into the chassis. I'll use the lights and grille on mine to tidy it up.
jcb_dismembered.jpg

Removed the rad before it got damaged, and started to prod the engine although now more confused than ever about which unit it is.
It has no tacho drive on the front cover.
jcb_enginefront.jpg
Also the earlier simms inline injection pump is fitted.
jcb_simmspump.jpg
But then the engine number doesn't make sense for it being a 38DT. Although Im quite willing to believe that's not the original stamping...
jcb_enginenumber.jpg

I'm going to pull it out and take the sump out before trying to start it as it has a stiff spot in the rotation when bar'd over. So its probably picked up some shell damage as the oil is water contaminated still so maybe I can avoid damaging it further by popping the sump off for a check before attempting to fire it.
You do not have the required permissions to view the files attached to this post.
Top

Not sure about the injector pumps but we had a 1970 H reg Mk 11 with an inline pump like yours. The 1980 mk111 had a rotary pump. In the mid 90s we fitted a new old stock 4.98 turbo and that had an inline pump.
Edit on reflection the replacement engine may have been an industrial or marine intended engine so perhaps the inline pump was part of the spec. The last Marshall tractors seemed to have had rotary pumps fitted. The number is probably original on yours?
Top

Thanks Pete, to be clear about it, the engine block above is the engine from the 3c mk2 I'm stripping for parts to fix my 3c3 with. The 3c3 still has a 4/98 in it with the cav rotary pump as you mention (that I've already rebuilt the pump on early on) but currently it has a issue where its passing water into the chambers and hydraulic locking next time its started.
The 3c2 came with either a 38DT, or later on a 4/98 with a simms minimech inline pump.
I was going to run this engine while I sort the 3c3 engine out properly out the machine as it was supposed to be a good engine but I dont like the feel of the crank having a tight spot, so while its out I'm going to check it over and might need to order parts to fix any issues before using it.
I checked the leyland engine book and read the thread you linked to but nowhere can I find a 4/98 V variant mentioned nor does it match the leyland engine number format so possibly that engine number is just something someone has stamped on. Maybe its a rebuilt 4/98 and thats a custom number put on by the remanufacturer or something.
The book mentions when a simms minimech is fitted the tacho drive is taken from the rear of the injection pump, so that may not be something to identify what it is also.
I supposed the obvious answer is to pull it and drop the sump and measure the stroke while I'm checking out the tightness. I'll do that in a couple more days of work when I get chance.
Top

Hi Pete, the cylinder with water ingress has a brand new liner and piston earlier in the thread. And I went against good advice to remove the other cylinders to check just because I needed it back together in one piece, but now I have a alternative I can take that engine out and into the workshop where I can work on it properly. I think the problem on that cylinder is head related, and started rebuilding another head to go in with new guides etc but I got sidetracked with this mk2 for spares.

A solid miserable wet cold weekends work has seen the mk2 80% stripped in the tucked away corner of the yard as the 3c3 is parked taking up the last of the space undercover in the barn. Decoupled the clutch, found a broken clutch release fork which was the cause of the clutch not releasing, and that the gauge cluster lines had leaks and it had no tacho cable. There's four bolts left in the engine mounts, and all the hydraulic/pump/steering gear is out and in storage apart from the loader lift rams and the stabilizer rams. Also with the engine disconnected from the gearbox it feels freer without a tight spot so maybe something isn't right in the gearbox (which I much prefer over the engine...) so I think its worth changing the oil and running it up with a pressure gauge on the gallery tapping itself before I pull the motor.

The reason the loader rams are still on is because the pin is flanged and has the flange on the inside edge so has to be knocked in inwards, but the pin fouls the tractor skid before it clears the ram eye.Its just a minor annoyance as I can leave them until I split the tractor inner skid from the main chassis later on but not sure how they would be changed in service if it were needed.
Top

Another saturday, and another biblical rainstorm. I dropped the contaminated oil and swilled out some of the sump a bit, changed the filter and put new straight 30w oil and a new filter in. Added a fitting for my handheld oil pressure gauge on the gallery tapping and a fresh battery nicked off the kubota ride on and a fuel system rigged up from a can and it was running nicely with 50psi of oil pressure at tickover but didnt want to run without coolant for long so shut it down.
I wanted to see if the oil/water issue came back with coolant and run it a bit longer too, so I put the cooling system & rad back on, topped it off with water and got it hot. And it doesn't seem to have water getting in the oil, once hot it had 45psi at tickover rising to 50 when at higher rpm. There's a couple of small oil leaks to attend to while its out but really happy with it & there's no way that radiator sealed and held pressure pre-accident like the seller claimed as I could hear hissing as soon as the motor started properly, it has the same distorted neck that mine had before I soldered a replacement on, so maybe I'll do the same to it but I can just run my repaired radiator anyway.

Then radiator and exhaust off, blocked off various orifices and took advantage of the deluge and brushed neat traffic film remover to loosen more of of the grunge clinging on. And jacked the first stabilizer leg out with a farm jack. The second one has a stuck pin so it will have to wait until its dry enough to use the oxy/acetelene torch to persuade it as by then I was too tired, cold, wet and miserable to take the sledge hammer to it until it moved.

Tomorrow should see more rain, removal of the cab and cutting out some usable sections for repair panels for the 3c3 cab, and engine out. Could be worse, could be 10cm of snow instead!
Top

Just a quick update, I've finished processing the 3c2, cleaned and stored all the rams/hydraulic hoses/pumps/engine etc. I had to torch the stuck stabilizer leg out of the frame in the end to get it in the press it was so stuck. And even in lumps everything is heavy to move about handballing it.

Main hydrachassis is being reused for a different project (a motorcycle dyno) after slicing off the front axle mount (and turning it upside down). The cab was sliced into repair sections but the lights on it dis-intergrated when they were removed they were so rotted. Pins/rams/pumps etc all cleaned up and put in my spares stash. And the rest of the parts are greased up and stashed round the back of the barn under a tarp ready for if they should be needed.
Now back to making the 3c3 better.
Top

Ooooh I want to know more about the dyno now! Maybe one for Tech Talk though

There's not tons of info to post yet, I picked up a froude dpy7 water brake a few years back (good for up to 750hp for as long as you have cool water) and in another of those horse trading deals I got a benford pedestrian roller that had exploded its drivetrain and made a new axle for the roller with heavy duty bearings to form a wheel drum so I could use the engine brake as a stand alone engine brake & also as a chassis dyno (to test out my motorcycle dragster). Those lumps and some connecting bits of drivetrain are sleeping tucked away in corners of the workshops getting in the way since. 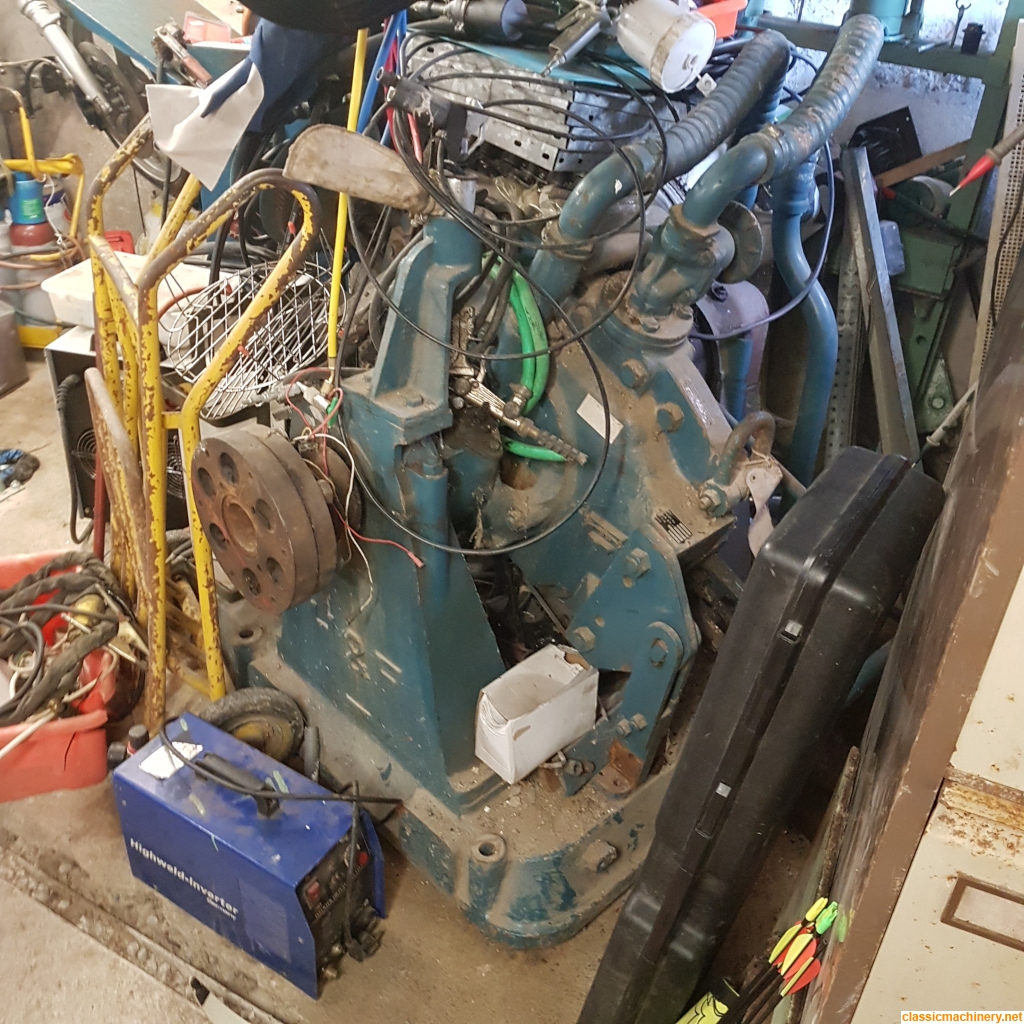 I needed a heavy frame to mount all the lumps in but Its going in the last 3rd of the barn as it needs space + storage for aprox 3000l of cooling water etc, so progress is on pause while this happens and I never constructed a frame because until then I have no space to house it in one piece.
Ive kept the radiator/support and flywheel housing from the 3c2 so I can bolt 4/98's to a engine test frame and run them on it also.
Top
Post Reply
91 posts

Users browsing this forum: No registered users and 1 guest