Are you working on a certain project? Renovating an old machine?
Tell us about it here and show us the progress.
Post Reply
80 posts

I don't blame you for moving the parts as soon as you can; once in your possession they're safe.

Hi,
I have just been reading through your posts. I know it's a bit late now but I have to ask the question.

Hi,
Just found this illustration in the Leyland manual showing the tool I referred to in my last post. It is used first to expand the top of the sleeve then pushed in as shown to expand the bottom. 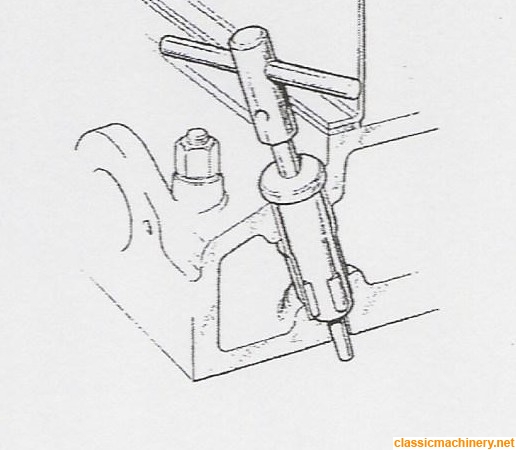 No, but the sleeves I fitted are the updated 37D2599 sleeves for a 4/98 which are sold as not needing the rolling tool because they incorporate the injector washer into the sleeve so when the injector is mounted it pushes the bottom of the sleeve into the head casting to seal it. Here's the fitment instructions for them :-
https://www.tractorspareparts.co.uk/ima ... ectors.pdf
I can probably make up a similar tool myself if needed, but the idea behind these more expensive sleeves is they don't need this and I was hoping to cure the dribble from the tops of the injector sleeves all my 4/98's have suffered with with them.

I'm looking at that valve seat rather suspiciously now Ive seen it, its completely different to the others and much much larger & it impinges onto where the injector hole is and almost extends into the gasket's fire ring. I think its a repair insert pushed into a oversize hole to clean up after bad seat damage, and wonder if its so large the boring for it has broken into the water jacket and it shifting has allowed the leak to start once hot.
If that is the case, I'll bronze braze up the leaking porus weld to the thermostat housing on the old "scrap" head with my oxy torch and put new guides/core plugs/injector sleeves in it and run that one instead. I'll post a photo of the seat repair to show what I mean.
Top

Here's a few pics.
The inserted seat, it looks cocked to me, so quite easily could be shifting in the chamber when it warms up as the interference fit changes. 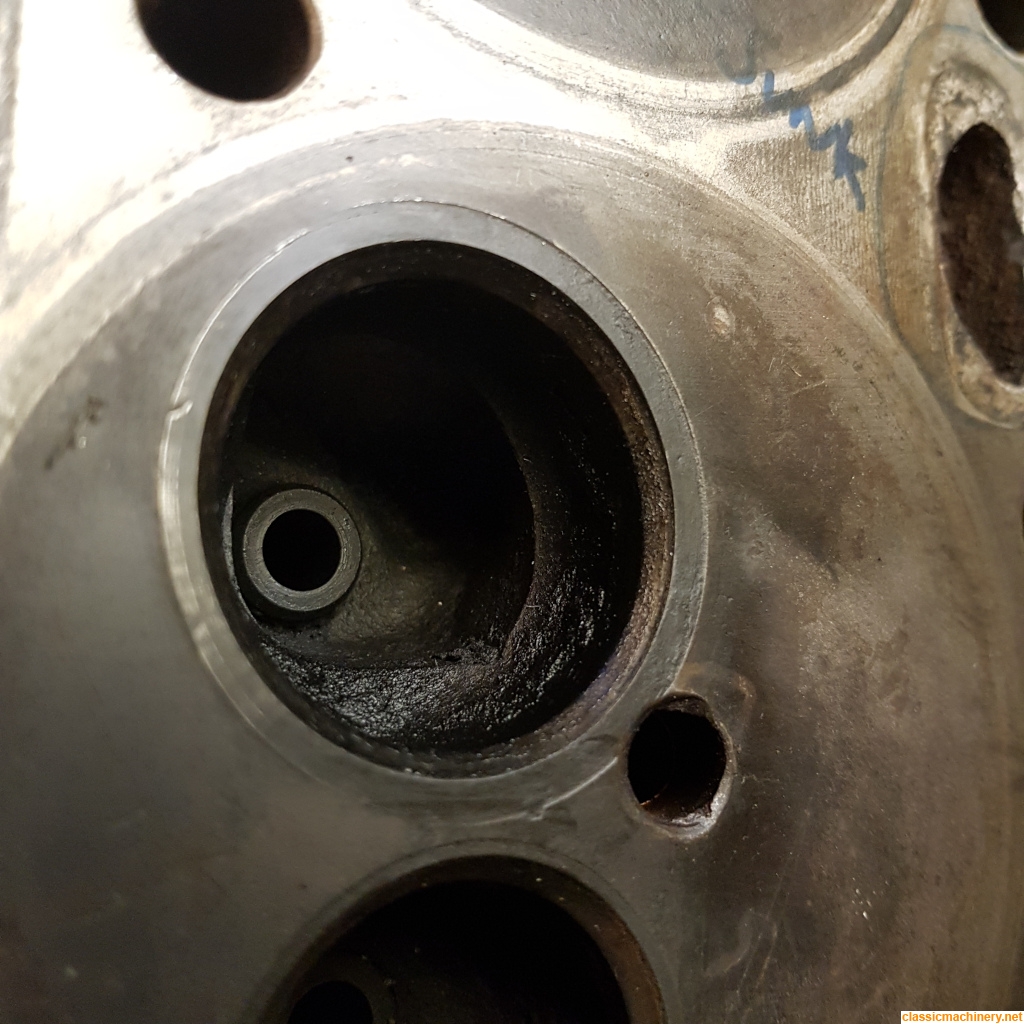 This is the spare scrap head with a porus repair, I think this is a good candidate to braze up with my newly acquired oxy-acet set, although I haven't done any oxy welding for 20+ years, I have done a lot of tig recently so a few practice runs and it should be possible. 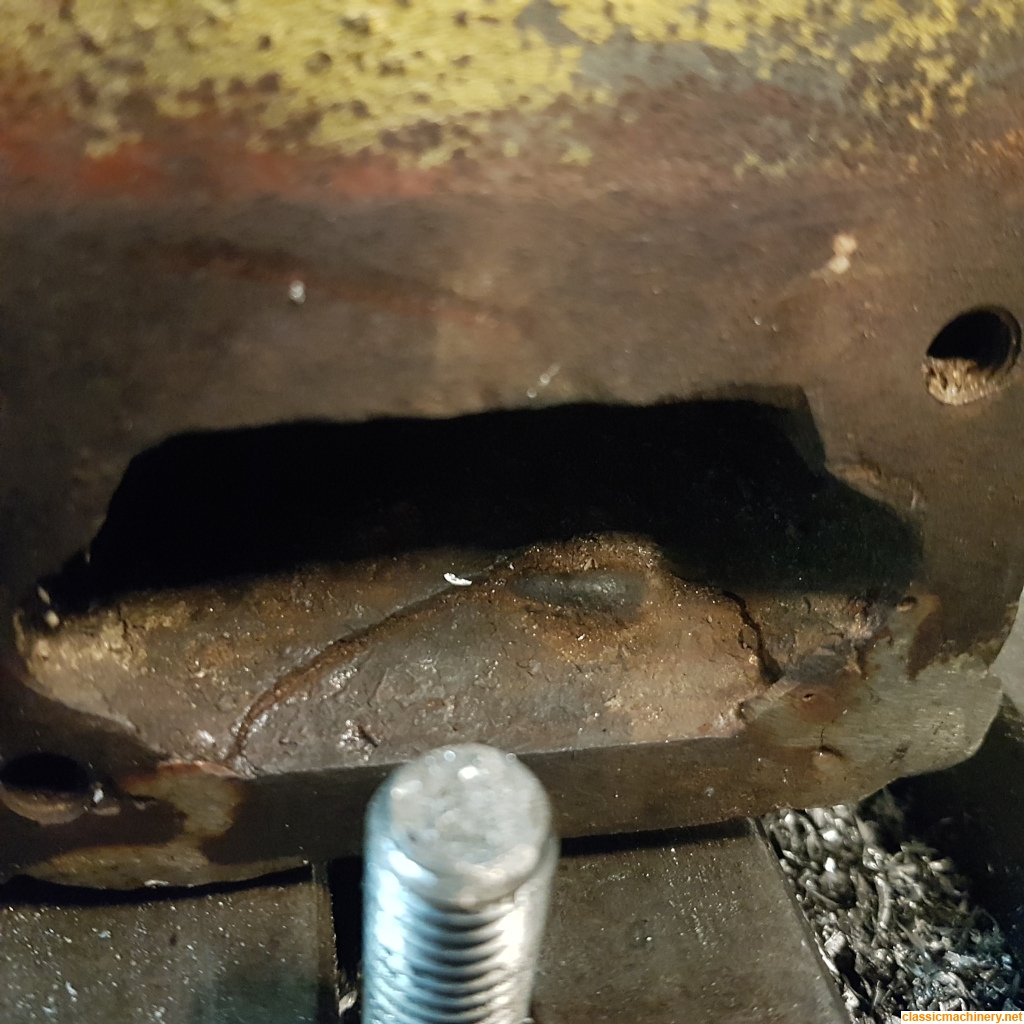 It might be rough and need every core plug, but at least its flat where it matters and doesn't have a loose seat. 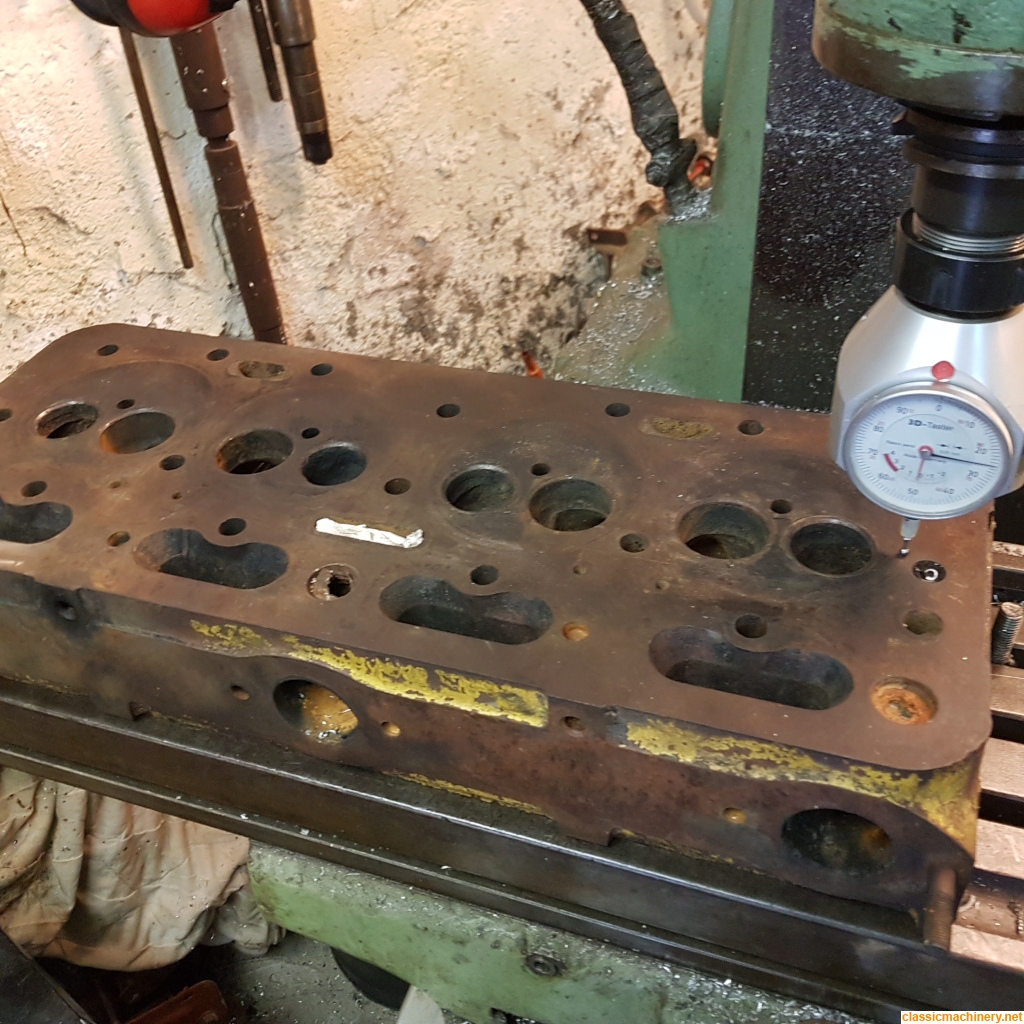 Of course all this pishing round with the head doesn't change the fact that the water into the cylinder issue enough to hydro lock the motor only started when I replaced the liner. It pressurised the water system before that, but sucking coolant in is a new development since that. Maybe more cylinder pressure pushed the weep over the edge and its got worse, but who knows? the only thing I know is if i dont test something, its guessing.

I think the best course is to pull the 4/98 and put the 38DT in its place, get the 4/98 up on a engine stand where it can be worked on easier and go through the liner seals and check the other liners. The guy who sold me the liner/piston will supply a kit less these parts for a reduced fee, so I could rebuild it properly that way while running the 38dt. As I'm also lucky enough to own a heenan and froude water brake, by then hopefully I'll have that workshop floor laid (what the JCB is needed for next) and we can get the water brake setup to run the 4/98 up on and test before it goes back in.
Top

Here's another thing, when this head is pressure tested, the water needs to be warm, as it doesnt start happening until the engine has been running for a few minutes and then shut off for the 2nd or 3rd time. So that also points to something shifting or moving with expansion.

Also to quantify, the seat looks cocked, because I measured it with a clock gauge, and it is about 0.4mm higher from the head surface on one side than on the other. Its a pretty poor replacement job if it hasn't shifted to leave it like that after all the work boring the seat hole oversize and getting it inserted, I wonder if the seat is concentric to the guide properly or relying on the guide being worn...
Top

Stroke of luck #2, guy operating a little yanmar digger doing some work local helpfully offered to pick all the buckets up with his digger and drop them off in my yard using his dumper if I slung them up myself and provided the straps/chains, so I did that today working them into positions where they could be picked easy and getting them strapped up ready and now they're all sat in my yard safe. I now have 9 buckets including the ones on my machine.

We was going to lift and shift the boom/kingpin assembly as he was confident it would handle it but it was way too much for his machine, and while really I anticipated this I'm not going to argue with a guy about what his machine is capable of and not, its his machine and he knows it best but he tried and stopped before any damage occurred.
Then stroke of luck #3, he's there the next weekend with a much bigger machine on the same job and is happy to lift it with that machine instead. I think its safe there a week from the curse of the transit tipper with a small hiab on it visiting at night due to the sheer mass of it. Maybe we'll find a transit on its side near it one morning

I also have a workable & safe plan locked in to get the machine home also, and its not going to involve me driving it or shenanigans. Someone has cut off the pedals for the clutch and throttle off getting the floor panels out, I guess to drop the oil after it went for a swim on its roof but the brake pedals are still connected and do something so that makes life easier. And the vendor gave me the large flogging spanners for undoing the rams also. So slowly coming together!
I'll take some pics when I get the machine back here proper, not much point of just a stack of buckets and a few spare rams so far, then I'll change the fluids again and filters and run it up properly with some hydraulic oil so I can assess the state of the pump etc before starting to take parts off.
Top

Its here, we used a telehandler and stropped the front axle to the forks/framehead then the telehandler lifted it slightly and provided the steering with some single side footbrake action to help steer from the jcb itself.
jcb2pic3.jpg

My homemade ram props, I split some heavy steel tube I had knocking about along the tube so it could be split and placed around the hard chrome section of the ram, and left room to put a wrap of old innertube under it, then clamped the two halves together with some intercooler clamps.
I was really glad I did it this way as at one point the loader arms lifted up, and normal ram props might be been dislodged. There was also a pinch bar lying right across the machine and strapped into place in case a clamp came adrift as a failsafe.
jcb2pic2.jpg

This shot shows what happened to the roof. The stabilizer leg that was down when it rolled wont retract fully with the strap so its possibly bent. The wheelarch has a split both sides where its flexed when it was on its back possibly also I noticed.
jcb2pic1.jpg

Also its leaking fluid from underneath, possibly from the hydrachassis, the steering wheel is shaped like a pretzel and other stuff.
It was a tidy looking machine pre-accident (I used to see it about and my kids would give me grief for not having painted mine as nice yet) and would be possible to reassemble it, fix/repair/replace all the bent & broken parts but it would be a big job and I already have one to finally make progress on fixing. The loader arms are in far far better condition than mine, it has a straight unbent main grille with period correct lights intact still, a hydraulic compartment door etc. But wow, is that cab a pain to get in and out of in comparison to a 3c3. Especially without the floorplates down.

For the 3c3, I got some new core plugs and plugged up the leaks in the repair on the "scrap" head, and I'm waiting for a parcel with a complete set of new valve guides to arrive from the UK for it. When that turns up, provided its not -4 like today, I'll put the head back on and run up the 3c3, if its fixed it even better and I can use it to move the parts into better places when I take them off the 3c2 before taking it apart further, if it still uses water it has to be the liner and it can come out as planned and I'll just have to figure ways to manhandle all the lumps with winches/pulleys and strops as usual.
You do not have the required permissions to view the files attached to this post.
Top

Users browsing this forum: No registered users and 7 guests